There are many reasons why you would like to have a local ABAP system installed on your PC. Maybe you don’t have access to any ABAP system, and just would like to try out some ABAP development. Or maybe you are like me, who has a lot of experience doing ABAP development, but not so much on the Basis side. And would like a system to play around in, where you can try different settings without ruining it for a lot of people.

A couple of years back I fiddled around with installing an ABAP system on my laptop using these guides:

It was a little tricky, but doable to install your own ABAP system on a laptop/PC.

Now SAP are delivering a formalized way to install the newest ABAP Developer Edition system in a VERY EASY way.

To boil it down, you just have to install a program (Docker Desktop) and then issue 2 commands in cmd.exe, then you have a running SAP ABAP system – it does not get easier than that.

In this blog I will show all the details for getting the server installed and how to start and stop it. It is very easy, and anybody can do it.

I am on a Windows 10 laptop, but this also works for MacOS and Linux. Refer to the documentation for details on these OS’es.

If you want the really short guide, then here it is:

The longer version is here…

Check out the ABAP section of the official site for downloading (free) software from SAP.

This refers to this blog:

Which again refers to:

The above links are the basis for this guide.

Please be aware of the system requirements. You need 16GB RAM for Docker, which means you probably need at least 24GB RAM in total. You also need appr. 170GB of free disk.

I am lucky because I have just gotten a new laptop. I use a Lenovo X1 Carbon Win10 with 1TB SSD and 32GB RAM. On this machine, I don’t have any problems at all. The ABAP server runs smoothly.

Please let me know in the comments if you can get it up and running on smaller configurations.

The ABAP NW751 server I mentioned in the beginning, was able to run on Windows 10 with just 8GB of total RAM on the laptop.

In the following, I will go through each step one at a time.

When starting Docker Desktop it should look like the above.

It will now start downloading data (the biggest file is 23.52GB)

It does not matter from which folder you issue this command. I did navigate to a specific folder, because I was unsure if it would download data to this. It turned out that all data is downloaded to Docker controlled folders. 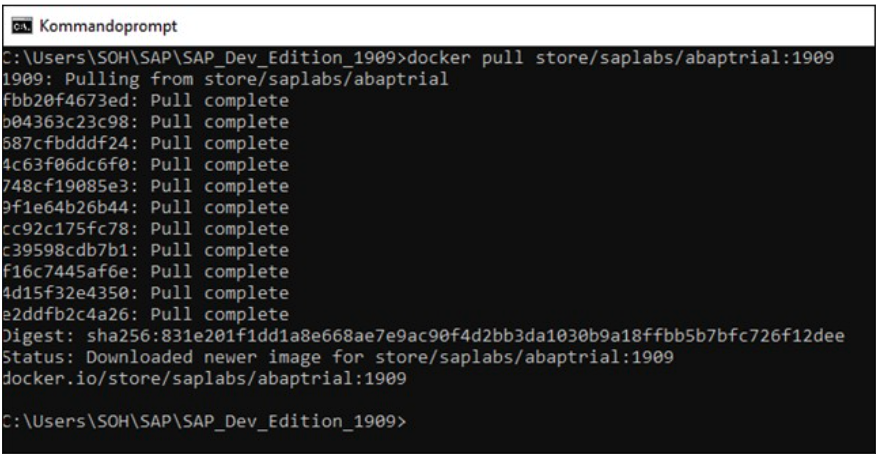 When everything is downloaded and extracted you will see the above.

Refer to this guide for details on startup parameters and troubleshooting.

In cmd.exe issue this command: 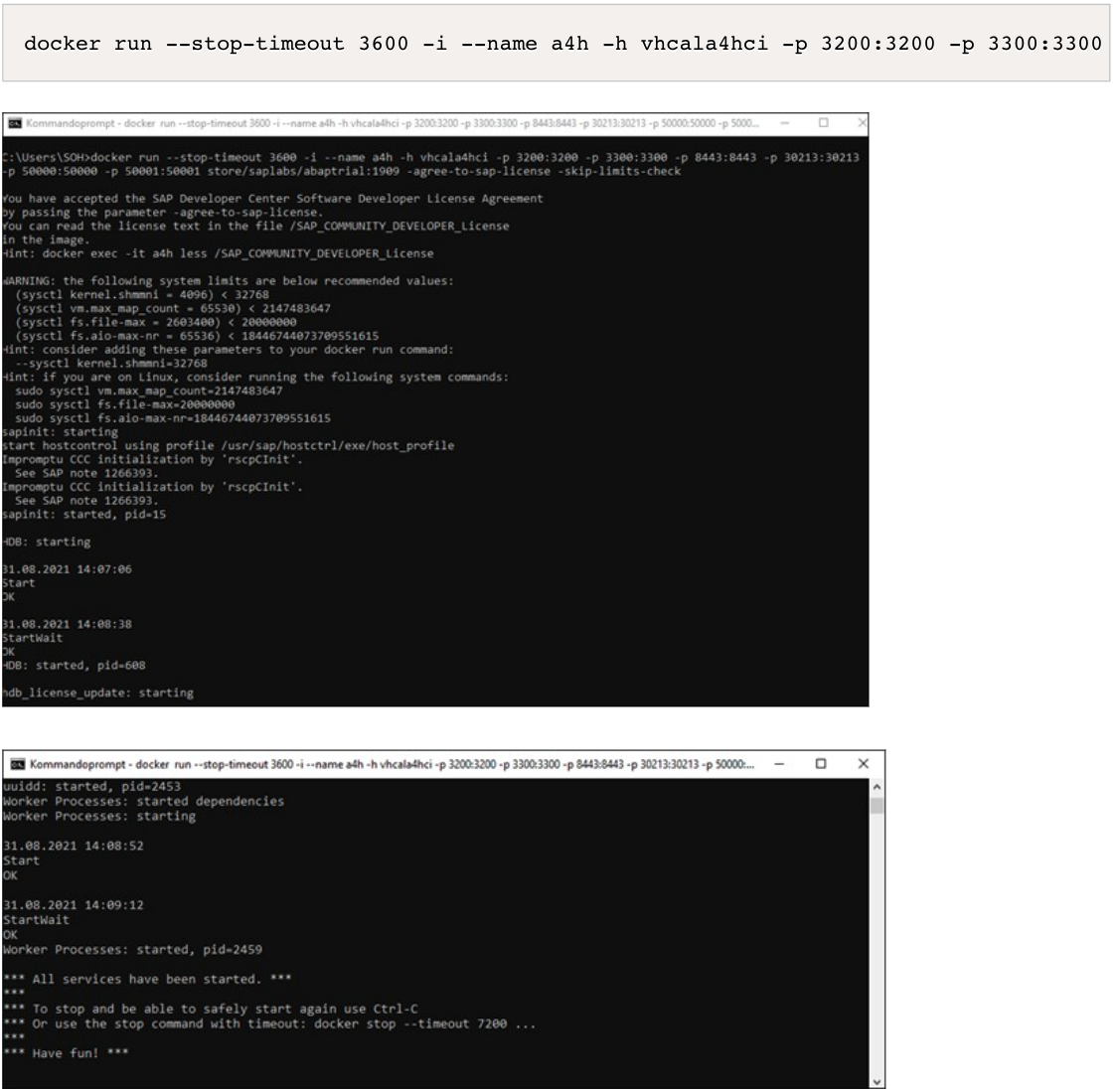 Now your SAP system is up and running. 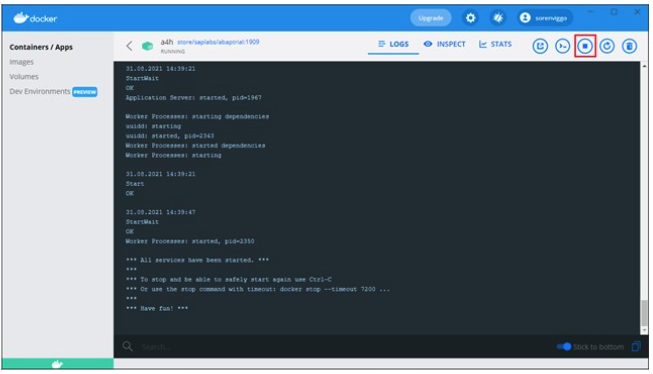 Simply click the ‘Stop’-button to shut down the server.

Docker will ensure this is done gracefully.

When you see this the server is completely shut down.

To start your server just mouse over the ‘a4h’-container and click the ‘Start’-button. 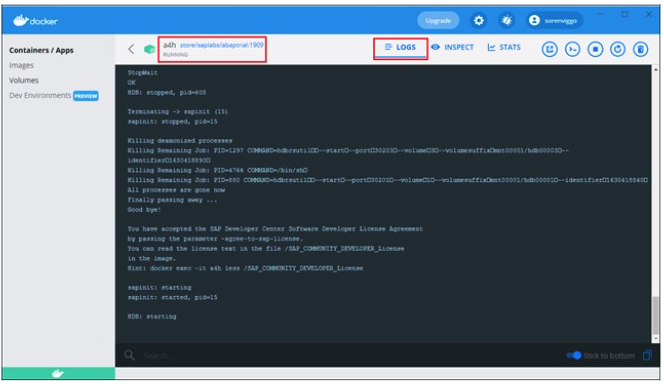 If you click on the container name and click ‘LOGS’, then you will see a command prompt on the status of the startup.

When it has started completely, you will see this message.

The hostname of the new server is ‘vhcala4hci’, but it is hosted on your PC (localhost) so in order to be able to use URL’s generated on the server, you can define a mapping on your local PC, which is done in the hosts file. 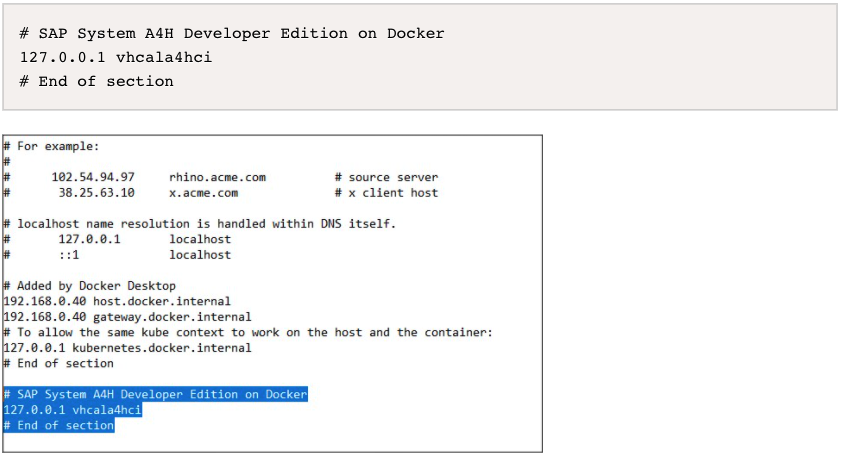 PS: I did not have permission to the save file onto itself from notepad. So I copied the file to another location and made the changes there. Afterwards I replaced the old hosts file with the new one.

Once you have this in place, you will be able to open URLs with the hostname of you server.

If you don’t make this adjustment you can just call the URL’s by replacing the hostname ‘vhcala4hci’ with ‘localhost’.

Open your SAP GUI logonpad and create a new connection. 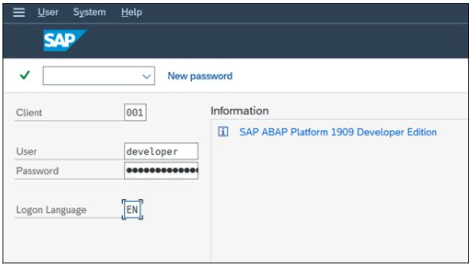 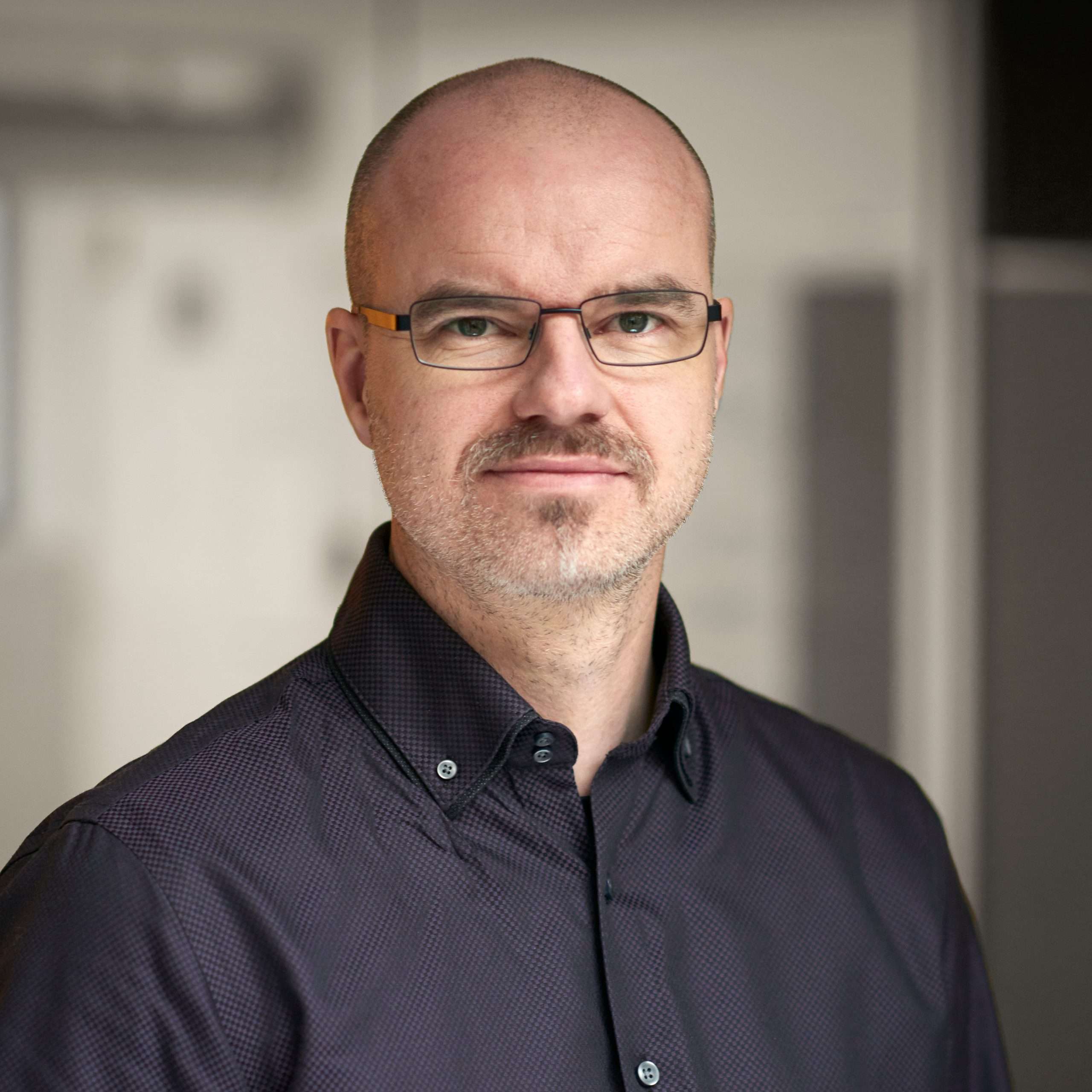